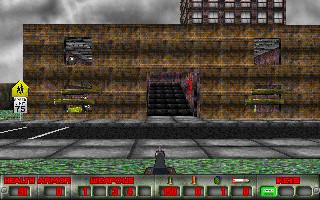 When it began few people noticed. A near doubling of UFO sightings over the city. But the local media dismissed them as hoaxes, military tests, or overzealous UFO fanatics. They were wrong.
The UFO's were real. Aliens had been visiting for some time, studying mankind and earth's resources.
Now they were planning an invasion.
After an investigation by secret government agencies a vast alien complex was discovered under the city. Fearing public reaction, an outbreak of a deadly new virus was faked to clear the city of its population.
The press and media swarmed near the city. A large scale military attack would be hard to explain and was ruled out. No, what is needed is a one man army. Someone trained in special operations, trained to run on raw courage, to kill without mercy, to eat things that would make a billygoat puke. No, not him, I'm talking about you!
Your mission is simple. Find the entrance to the underground complex, exterminate all alien life, and destroy everything else. Don't be fooled by what appear to be government agents. These are clones programmed by the aliens to serve their purposes.

In 2000 the developers had this full version of the game available for download from their website as a freeware release. This package includes both the DOS and Windows releases, updated to the latest version (v1.2), and the game editor, VEdit.